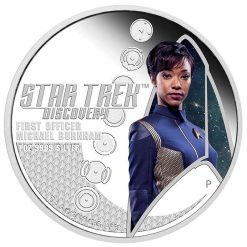 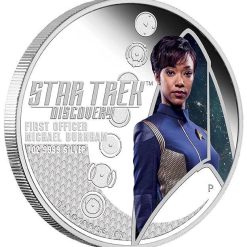 A new release from our immensely popular Star Trek program, this two-coin silver set celebrates Discovery, the sci-fi classic’s most recent series. Discovery ground breaking casting is exemplified by Sonequa Martin-Green playing the first black female lead in the franchise’s 50-plus year history. Portraying the other character First Officer Michael Burnham and her ship the U.S.S. Discovery NCC-1031. The coins designs also include a representation of the famous Delta Shield insignia and the United Federation of Planets logo.

Issued as legal tender under the authority of the Government of Tuvalu the coin features the Ian Rank-Broadley effigy of Her Majesty Queen Elizabeth II, the 2018 year-date and the monetary denomination on its obverse.

The two-coin set is packaged in a case designed to look like a Star Trek Transporter which lights up when the lid is opened, and is accompanied by a numbered Certificate of Authenticity.