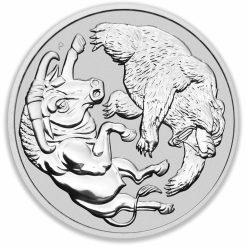 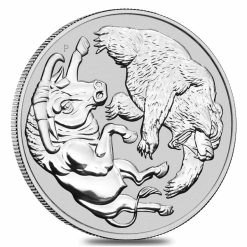 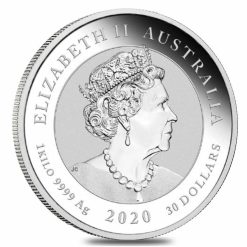 Certain to resonate with investors worldwide, this 1kg silver bullion coin features an impressive visual representation of the ever-changing nature of financial markets. The Bull & Bear 1kg silver bullion coin refers to the terms ‘bull market’ and ‘bear market’ which are commonly used to describe rising and falling markets respectively.

Believed to originate from the way these animals attack their opponents, with a bull thrusting upwards and a bear swiping downwards, the expressions are metaphors for the movement of the market.

Struck from 99.99% pure silver in bullion quality, the coin is issued as legal tender under the Australian Currency Act 1965.

No more than 500 Bull & Bear 2020 1kg Silver Bullion coins will be released worldwide.

DESIGN
The coin’s reverse portrays a representation of a bull and a bear. The animals are in opposing positions and appear to be in the midst of attack. Also included in the design is The Perth Mint’s ‘P’ mintmark.

The obverse bears the Jody Clark effigy of Her Majesty Queen Elizabeth II, the weight and purity, the 2020 year-date and the monetary denomination.