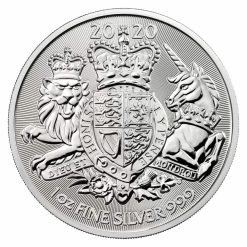 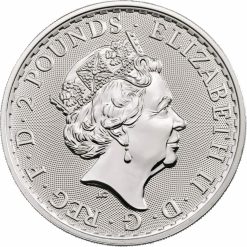 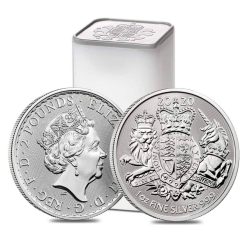 A mainstay of British coinage for centuries, the Royal Arms is a majestic symbol of strength and majesty which represents the illustrious history of monarchy and heraldry in the United Kingdom.

It acts as the official coat of arms for the British monarch and its origins lie on the medieval battlefield where it would be seen on shields, banners and dress. It has evolved through the ages and is a true indicator of power, approval and duty.

First appearing in 1983, the iconic design by Eric Sewell has been reinterpreted by Timothy Noad for 2019. This design exemplifies the royal heritage which each monarch inherits during their reign and features the heraldic devices which have lasted through the ages, such as the Lion of England and Unicorn of Scotland supporting the shield.

The obverse of the coin displays the regal effigy of Queen Elizabeth II, designed by Jody Clark as well as the 2 pound denomination.

2020 The Royal Arms silver bullion coins come in tubes of 25.

Images are for illustration purposes only.
Bullion products supplied may vary in finish, including colour tone, tarnishing and milk spotting. Image quality may also vary when viewed on different desktop and mobile devices.