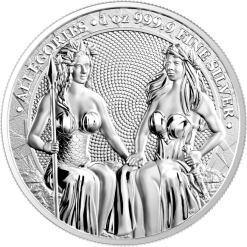 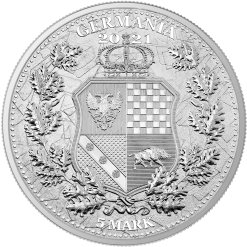 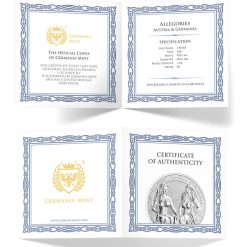 Austria & Germania is the fourth coin from Germania Mint’s Allegories, coming to Collectors in 2021. The whole series depicts personifications of countries around the world in a form of beautiful, sensual and strong women. The Allegories coins are created in one diameter of 38.61 mm and four different heights and weights, from 3 mm for 1 oz coin to 25.85 mm for 10 oz coin, which is exceptional not only because of its thickness the blanks, from which it has been minted, were processed manually.

Reverse
The reverse of the coin presents the personifications of Austria and Germania, depicted as young and beautiful women. In the past, Lady Austria was regarded as the epitome of the multi-ethnic country. In the artistic vision of Germania Mint, she is holding a spear, which symbolizes the axis of the world, power, dignity and honour. Austria’s head is decorated with a laurel wreath, a symbol with multiple positive meanings, whilst Germania is crowned with a branch of an oak – the tree that has accompanied her from the very beginning of the series. In turn, our heroine holds her inherent attribute – the imperial sword “Reichsschwert”. Closeness between the two Germanic amazons represents friendship between both cultures.

Obverse
The image on the reverse is the coat of arms representing moral principles and noble values. Germania was a historical land and has never been an official country, that is why Germania Mint decided to create their own interpretation of its coat of arms. Its symbols and design are a creation of Germania Mint’s imagination, however it has been created in accordance with applicable heraldry rules.

All values presented in the symbolism above, were respected by Germania and Austria.