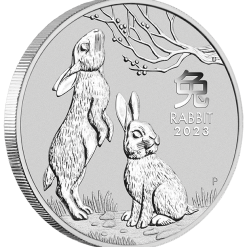 These magnificent silver coins celebrate the Year of the Rabbit, the fourth of twelve animals associated with the ancient Chinese lunar calendar.

Each coin’s reverse portrays an alert rabbit with its ears erect and another rabbit stretching towards a budding branch. Included in the design is the Chinese character for ‘rabbit’, the inscription ‘RABBIT 2023’ and the Perth Mint’s ‘P’ mintmark.