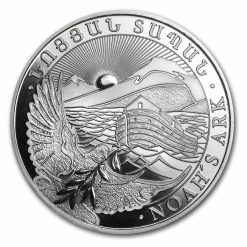 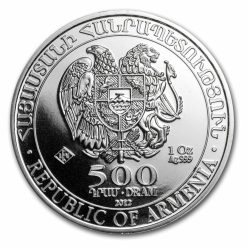 In the biblical tale of Noahs Ark, God comes to Noah to let him know of an epic flood that will engulf the Earth and wash away the sins of mankind, along with most of humanity itself. Noah builds a massive ark for his family and two of each kind of animal on Earth, all that will be needed to repopulate the world.

As 40 days of rain and floods come to an end, Noah releases a dove to seek out dry land. It returns to the ark with an olive branch in its beak, signaling that dry land is available and the ark may have a place to dock and help start humanity over from the beginning. These scenes play out on the Armenian Silver Noahs Ark Coins.

The obverse of all Armenian Silver Noahs Ark coins feature the coat of arms for the Republic of Armenia. In the center is the national shield, upon which youll find the image of Mount Ararat complete with a small version of Noahs ark resting at its peak. Engravings on this face are in both English and Armenian for the nation of issue.

On the reverse of the 2012 1 oz Armenian Silver Noahs Ark Coin is a depiction from Kurghinyan. His image of Noahs Ark comes as the sun finally rises following the rain and floods. The dove flies into the foreground with an olive branch in its beak and Mount Ararat rises high into the background.

All Silver Noahs Ark coins are produced for the Republic of Armenia in Germany at the Geiger Edelmetalle Mint.