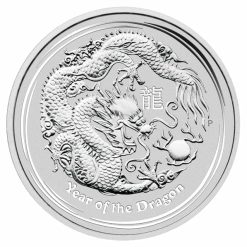 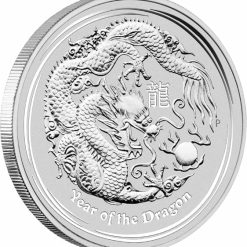 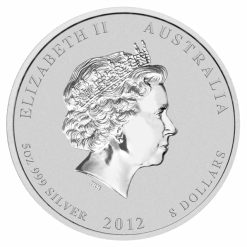 Celebrating the auspicious Year of the Dragon, this magnificent coin is struck from a whopping 5oz of 99.9% pure silver. The format has proved so popular in the past that it’s advisable to snap up your dragon fast!

The fifth animal in the 12-year cycle of the Chinese zodiac, this mythical beast is considered an especially auspicious creature.

Chinese Dragon Reverse Design
The reverse of the coin depicts a representation of a dragon with a symbolic pearl. The Chinese character for ‘dragon’ and the inscription YEAR OF THE DRAGON also appear in the design with The Perth Mint’s traditional ‘P’ mintmark.

Australian Legal Tender
Issued as legal tender under the Australian Currency Act 1965, the coin features the Ian Rank-Broadley effigy of Her Majesty Queen Elizabeth II on its obverse.