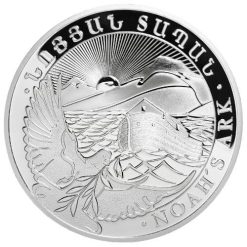 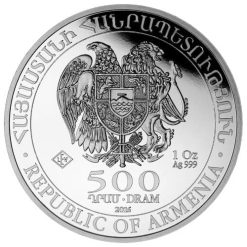 People from across the Christian world are familiar with the story of Noah and the great flood God unleashed upon the Earth, as told in the Book of Genesis. God came to Noah offering his family a chance at salvation if they constructed a massive ark to save themselves and two of every animal in the world.

The story has real connections in Armenia, where the resting place of Noah’s Ark, Mount Ararat, was historically located. The tiny nation saw its claims to Mount Ararat erased at the end of World War I as the Soviet Union and Turkey redrew borders following the fall of the Ottoman Empire. The border between Armenia and Turkey which had formerly gone over the mountain itself, was redrawn to include the mountain within Turkish lands.

On the obverse side of the 2016 1 oz Armenian Silver Noah’s Ark coin is the national emblem for the nation of Armenia, along with the engraving of the phrase Republic of Armenia in both English and Armenian. The coins face value, fineness, metal content, and year of minting are also included on this side.

The reverse bears the image of Noah’s Ark as it floats on the flood waters. In the background, the sun rises over the cliffs of Mount Ararat, while a lone dove flies into the foreground with an olive branch in its beak, signalling that it is now safe to find land as the flood subsides.