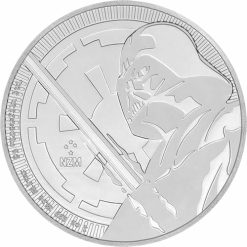 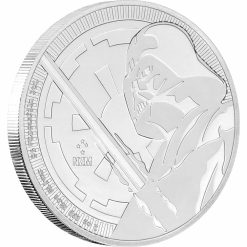 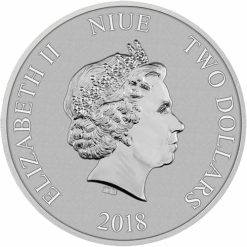 Darth Vader was originally known as Anakin Skywalker in the STAR WARS franchise and was a Jedi warrior prophesied to bring balance to the Force. However, he became a leading force of disruption and evil when he was turned to the dark side of the force by Palpatine. Like many evil characters though, Vader earns redemption following an encounter with his son, Luke Skywalker.

On the reverse of these 2018 1 oz Niue Silver Star Wars Darth Vader Lightsaber coins is a stunning image of Vader with his lightsaber. Both the dark lord and his lightsaber are struck as raised elements with a polished finish and set on a satin-matte background field. In the background, the Imperial logo of the empire is featured.

The obverse side of the 2018 Star Wars Darth Vader Lightsaber Coin includes the right-profile portrait of Queen Elizabeth II. This effigy of the Queen is the fourth-generation design created by Ian Rank-Broadley for the Royal Mint of England in 1998. A popular design, it has featured on countless British and Commonwealth coin issues over the past two decades.