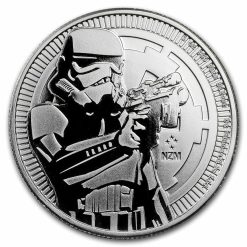 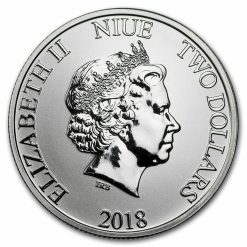 Has extreme scratches on the Queen’s Head and the Storm Trooper itself.

Stormtrooper Background
First introduced in the original Star Wars film (1977), the stormtrooper is a fictional soldier of the Galactic Empire, led by Emperor Palpatine, and Darth Vader and Grand Moff Tarkin, his commanders. The stormtroopers are able to be ready for battle quickly, and act as an army of the Empire, by policing areas and responding to civil unrest.

The stormtrooper is distinctly characterized by its white armor, which encapsulates the body to protect them in battle. In The Force Awakens (2015), the stormtroopers are upgraded and serve the First Order, led by Supreme Leader Snoke, along with Kylo Ren, General Hux, and Captain Phasma, his new commanders.

From sealed tubes, unfortunately quality control wasn’t controlled on this batch of coins.