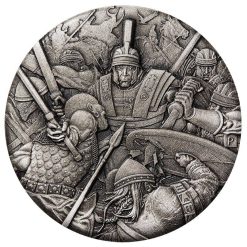 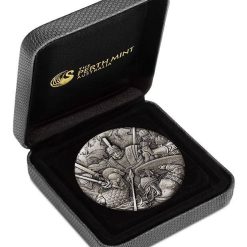 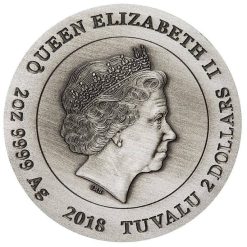 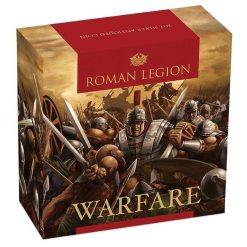 From an exciting new three-coin series depicting legendary combative forces, this first coin captures the frenzied battle scene between ancient Roman legionaries and Gallic tribesmen. To enhance the details, the coin has an antique finish that gives the appearance of an ancient artefact.

Accompanied with free viewing goggles and access to a full-colour panorama you can immerse yourself in a three-dimensional 360˚ view of the fierce Roman Legionaries at war.

Detailed Battle Design
This intricately crafted coin portrays in extraordinary detail the armour and weaponry of ancient Roman warfare. Depicted on the reverse is a group of Roman legionaries in fierce combat with Gallic opponents, with two cavalrymen, an elephant and an eagle in the background. The design also includes The Perth Mint’s ‘P’ mintmark.

Tuvalu Legal Tender
The coin is issued as Tuvalu legal tender and its obverse features the Ian Rank-Broadley effigy of Her Majesty Queen Elizabeth II, the 2018 year-date and the monetary denomination.

Limited Mintage
No more than 2,000 of the Warfare – Roman Legionary 2018 2oz Silver High Relief Antiqued Coins will be released.

Viewing Goggles
This coin will be shipped with a flat-packed pair of 3D viewing goggles which include instructions for simple assembly. Using a smartphone and Near Field Communication (NFC) technology the goggles enable the full 3D view.

Keep the 3D viewing goggles to fully enjoy the scenes of the next releases in the series.

Please note that to view the panoramic artwork an internet connection is required.This complementary feature is available on most smartphones, but may not work on some older models. Swan Bullion cannot guarantee that the any or all of the feature works with or is accessible through your devices or carrier.