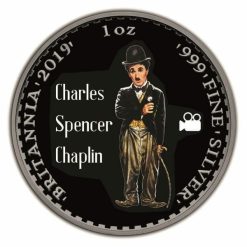 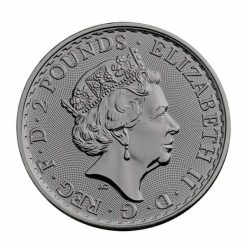 The reverse of this Britannia coin encompasses the legendary Charles Spencer Chaplin, known better as Charlie Chaplin. He was an English comic actor, filmmaker, and composer who rose to fame in the era of silent film. He became a worldwide icon through his screen persona, “The Tramp”, and is considered one of the most important figures in the history of the film industry. The obverse has an effigy of Her Majesty Queen Elizabeth II encased entirely in a sleek black ruthenium.

Your coin is displayed elegantly in a black case accompanied by a numbered certificate of authenticity, limited at only 100 pieces world wide. Your case is then enveloped in exquisite packaging showcasing a drawing of Charlie Chaplin with a quote on the back.

Note: The colourisation / plating on this piece was performed by an experienced third party company, not by the mint of origin.

These are modified items and as such, can not be used as currency in the mint issuer’s country.