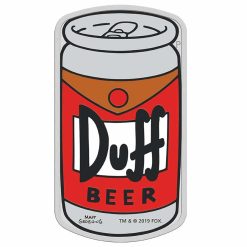 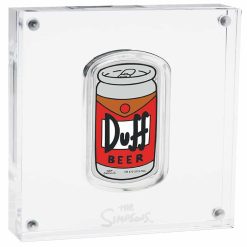 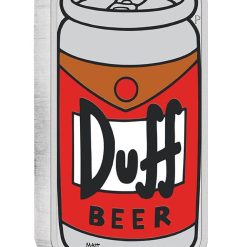 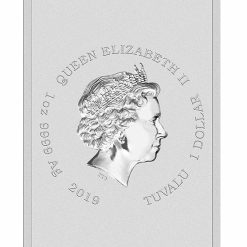 The seventh release in The Perth Mint’s exclusive The Simpsons coin program, this brightly coloured shaped coin depicts a Duff beer can, Homer Simpson’s drink of choice and the most popular beer in his fictional home town Springfield.

First introduced in 1987, The Simpsons family originally appeared in 30-second segments on The Tracey Ullman Show. Two years later, The Simpsons premiered as a half-hour series and instantly became a worldwide pop-culture phenomenon, now seen in 60 countries in 20 languages. In 2018, The Simpsons reached an incredible milestone becoming the longest-running primetime scripted show in television history.

DESIGN
The coin’s reverse portrays a coloured image of a Duff beer can, Homer Simpson’s drink of choice and the most popular beer in Springfield. Included in the design is Matt Groening’s signature and The Perth Mint’s ‘P’ mintmark.

The Ian-Rank Broadley effigy of Her Majesty Queen Elizabeth II, the 2019 year-date, the weight and fineness, and the monetary denomination are depicted on the coin’s obverse.