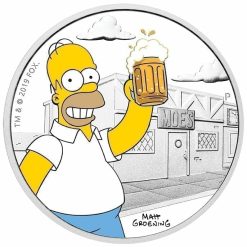 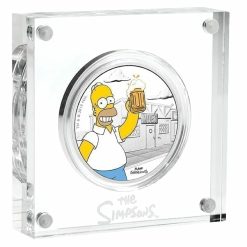 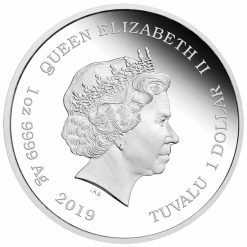 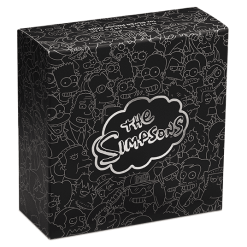 The Simpsons first aired as a half-hour television series in 1989. Now in its 30th season, it is the longest-running primetime scripted show in television history. A worldwide pop-culture phenomenon seen across 60 countries in 20 languages, the show was honoured with a Star on The Hollywood Walk of Fame in 2000. It has won 33 Emmy Awards, 34 Annie Awards, a 2017 People’s Choice Award and was the first animated series to win a Peabody Award.

The Simpsons is a Gracie Films Production in association with 20th Century Fox Television. James L. Brooks, Matt Groening, and Al Jean are the executive producers.

Homer Simpson Design
The coin’s reverse portrays a coloured image of Homer Simpson raising a glass in front of Moe’s tavern. Included in the design is Matt Groening’s signature and The Perth Mint’s ‘P’ mintmark.
The coin’s obverse depicts the Ian Rank-Broadley effigy of Her Majesty Queen Elizabeth II, the monetary denomination, the weight and fineness, and the 2019 year-date.

Presentation Packaging
Accompanied by a numbered Certificate of Authenticity, each coin is housed in a perspex display case and comes in a themed shipper.