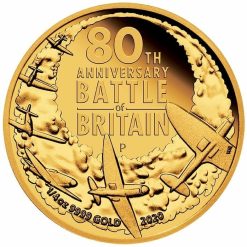 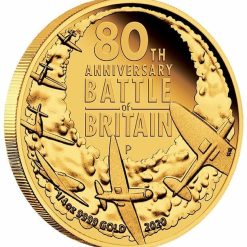 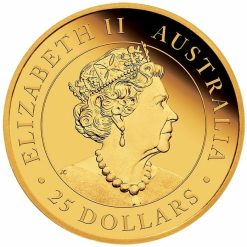 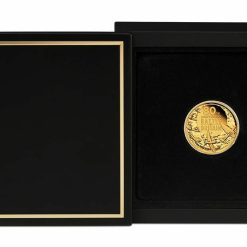 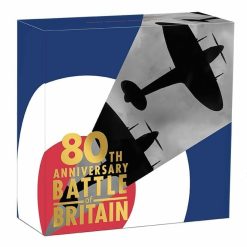 The Battle of Britain took place over southern England and the English Channel between July and October 1940. Pitting Britain’s Royal Air Force (RAF) against the German Luftwaffe, it was the first major campaign of
the Second World War to be fought entirely by air forces.

Following the Fall of France, the might of Nazi Germany turned its attention to the last bastion of European democracy – the British Isles. Hitler’s plan was to neutralise the RAF’s aircraft before launching a naval invasion code named Operation Sea Lion.

Despite grim prospects and being heavily outnumbered, the pilots of the RAF rose to the occasion with remarkable courage. The battles were characterised by fierce dog fights involving their legendry Hurricanes and Spitfires, and Germany’s famous Messerschmitt Bf 109s.

Struck by The Perth Mint from 1/4oz of 99.99% pure gold in proof quality, the coin is issued as legal tender under the Australian Currency Act 1965.

The Perth Mint will issue no more than 500 of the 80th Anniversary of the Battle of Britain 2020 1/4oz Gold Proof Coin.

DESIGN
The coin’s reverse portrays representations of six Spitfire fighter planes against a stylised cloud, which surrounds the inscription ‘80TH ANNIVERSARY BATTLE of BRITAIN’. The design also includes The Perth Mint’s ‘P’ mintmark, the coin’s weight and fineness and the 2020 year-date.

PRESENTATION
The coin is housed in a prestigious wooden presentation case within a superbly illustrated shipper and is accompanied by a numbered Certificate of Authenticity. 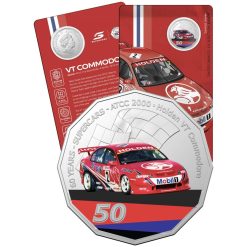