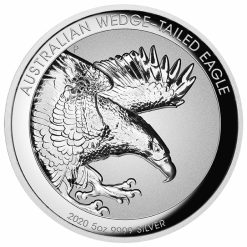 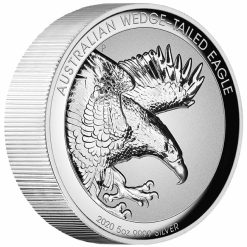 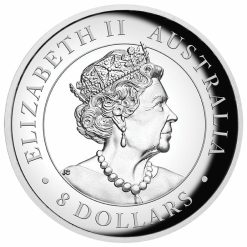 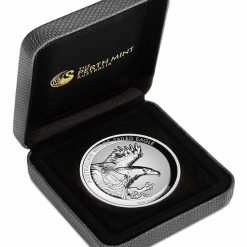 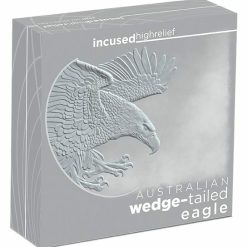 Named for its long, distinctively shaped tail, the wedge-tailed eagle is Australia’s largest bird of prey and one of the biggest eagles in the world. Found throughout mainland Australia, Tasmania and southern Papua New Guinea, the bird has an impressive wingspan of up to 2.7 metres. Distinctive black, brown and reddish-brown feathers extend to cover its legs.

The Australian Wedge-tailed Eagle 2020 5oz Silver Proof Incused High Relief Coin is struck by The Perth Mint from 99.99% pure silver and issued as legal tender under the Australian Currency Act 1965.

No more than 1,000 of these coins will be released worldwide.

DESIGN
The coin’s reverse depicts a magnificent wedge-tailed eagle swooping on its prey in the midst of a hunt. The design also includes the inscription ‘AUSTRALIAN WEDGE-TAILED EAGLE’, the 2020 year-date, weight and fineness, and The Perth Mint’s ‘P’ mintmark.

The reverse design elements typically pressed in raised high relief have been recessed below the coin’s surface in an impressively detailed incused strike. The coin’s obverse has been struck in The Perth Mint’s traditional high relief finish.

PRESENTATION
This coin is housed in a grey leatherette case with in a themed shipper and is accompanied by a numbered Certificate of Authenticity.

ABOUT THE DESIGNER
This is the fifth wedge-tailed eagle design for The Perth Mint by renowned American sculptor and engraver, John M. Mercanti. The 12th Chief Engraver of the US Mint, John Mercanti produced more coin and medal designs than any other employee in the organisation’s history.