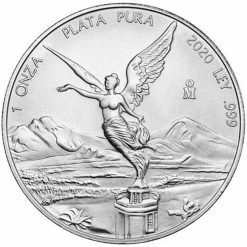 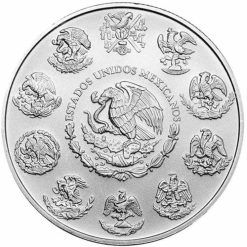 DESIGN
The coin’s reverse features a depiction of Winged Victory. This symbol is prominent in Mexican society and can be found today atop the Mexican Independence Victory Column in Mexico City. Depictions of Winged Victory date back to the 19th-century struggle for independence from Spain, with the first major depiction of a coin coming with the 1921 introduction of the gold Centenario.

The obverse of each coin features the modern Mexican coat of arms in the centre. This seal includes a golden eagle on a cactus as it battles a serpent. The design has a wreath below and an inscription of “Estados Unidos Mexicanos” above. Around the edge of the design field, 10 historic versions of the Mexican coat of arms are showcased.

PRESENTATON
Individual coins are presented in a Swan Bullion plastic flip. Multiples of 25 are packaged in plastic tubes.