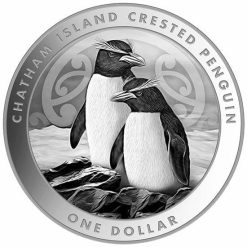 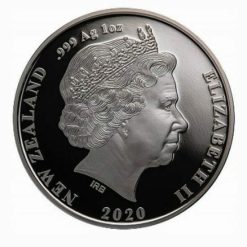 This is the first silver bullion coin produced to have the New Zealand currency on it.

The coin’s reverse depicts a pair of Chatham Island Crested Penguins standing on the rock amid the turbulent ocean. In the background a Maori symbol is visible, representing the rich and fascinating heritage of the New Zealand’s native culture.

The coin’s obverse features the effigy of Queen Elizabeth II by Ian Rank-Broadley, information about the country of origin, metal purity and the year of issue.

These coins come individually packaged in capsules accompanied by numbered certificates of authenticity. There are 20 coins to a roll and 100 coins (5 rolls) to a box. Limited world wide mintage of 25,000.