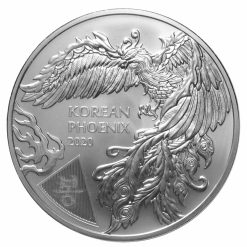 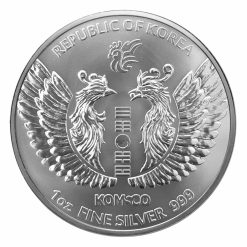 Korean Phoenix is the ‘Bong-Hwang’, an imaginary bird that has been praised since ancient times. The Phoenix (‘Bong-Hwang’), along with the dragon, symbolized the emperor and represented nobility and auspiciousness. Since 1967, it has been used as the presidential seal of South Korea.

The obverse side of 2020 1 oz South Korean Silver Phoenix includes an artistic depiction of the phoenix in its full glory. The bird is in flight in the air with its talons reaching down, its long tail feathers flowing down underneath its frame and its wings spread out wide. The date of issue and name of the new series is featured on this side.

Also visible on this side of the coin is a new security image that KOMSCO has produced in a different manner. Rather than creating the security feature on the medal after striking using resins or other visual effects, this rigid, lined feature is struck into the coin. As you adjust the angle of viewing, the Korean language terms for Bong and Hwang appear.

On the reverse face of the 2020 South Korean Silver Phoenix, you will find a motif based on the presidential seal for South Korea. The image features two phoenixes facing in toward one another with the Taeguk in the center. The nation of issue, weight, metal content, and purity are all on this side.

The South Korean Phoenix 1oz silver rounds come in tubes of 25 with 10 tubes to a monster box (250 rounds in total).