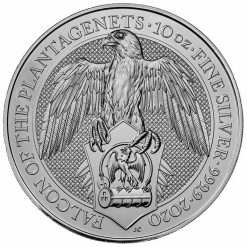 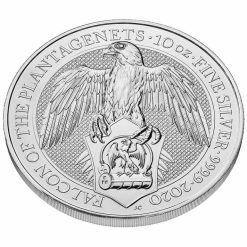 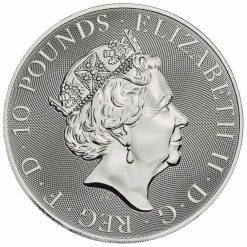 This ten-ounce silver bullion coin is a new addition to The Queen’s Beasts Collection. Inspired by ancient symbols of power and identity, the range brings to life the ten imposing statues that lined the entrance to Westminster Abbey in 1953 at the coronation of Her Majesty The Queen.

In heraldry, the falcon symbolises single-minded determination. Widely used by Edward IV, the first Yorkist king, his falcon sits upon a golden fetterlock, slightly open to symbolise Edward’s claim to the throne. The falcon was later adopted by Henry VII, who united the Houses of York and Lancaster. By the reign of Elizabeth I, it had been accepted as an established royal beast.

Bullion has been chosen as an investment by individuals, governments and organisations for thousands of years. In more recent times, people have considered it a hedge against stock market volatility and geopolitical events.

PRESENTATION
Each coin is individually packaged in a protective capsule.