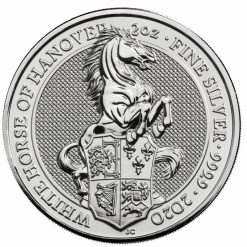 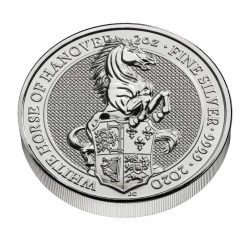 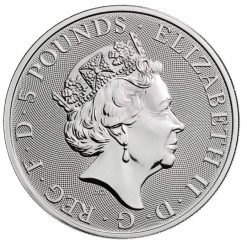 The ever popular Queen’s Beasts Collection continues with the release of the latest bullion coin, featuring the White Horse of Hanover. At Her Majesty The Queen’s coronation in 1953, ten imposing statues lined her entrance to Westminster Abbey, each one standing guard to represent her ancestors. The White Horse came to Her Majesty through her Hanoverian predecessors. In 1714, Georg Ludwig, ruler of the German duchy of Hanover, succeeded to the throne of Great Britain as George I. He brought with him the heraldry of the region including the device of a white horse on a red background.

Designer Jody Clark has highlighted the horse’s strong silhouette, a look befitting this magnificent heraldic beast. The badge on the horse’s shield bears the three lions of England, the lion of Scotland, the fleur-de-lis of France, the Irish harp and the Arms for Hanover.

Featuring a secure chainmail texture, the realism of the White Horse of Hanover is displayed to its fullest. The obverse features the latest definitive coinage portrait of The Queen by the prestigious Royal Mint designer Jody Clark.