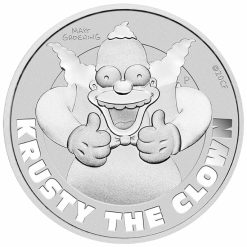 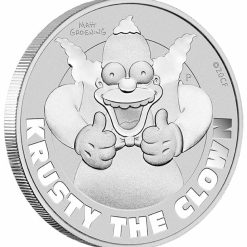 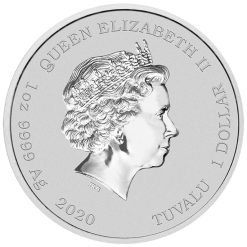 The Perth Mint will release no more than 25,000 of the Krusty the Clown 2020 1oz Silver Bullion Coins worldwide.

DESIGN
The reverse of the coin depicts a representation of Krusty the Clown smiling with two thumbs up and the inscription ‘KRUSTY THE CLOWN’. The design also includes Matt Groening’s signature and The Perth Mint’s ‘P’ mintmark.

The Ian Rank-Broadley effigy of Her Majesty Queen Elizabeth II, the 2020 year-date, the coin’s weight and fineness and the monetary denomination are depicted on the coin’s obverse.

Note: This is the BULLION version of the coin (it does not include the black card)