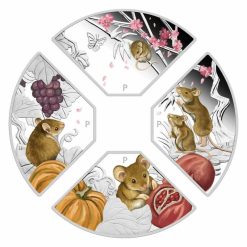 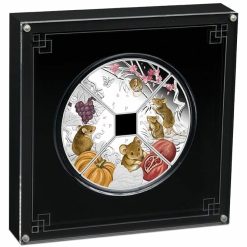 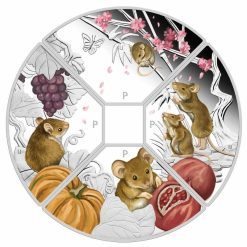 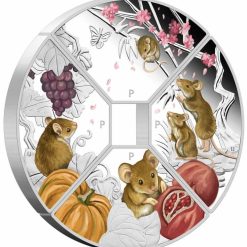 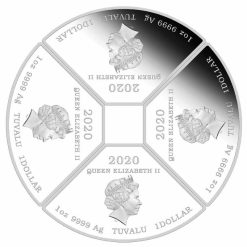 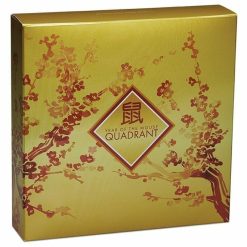 The Quadrant Mouse set consists of four coins that each comprise a quarter of a circle. When arranged together the coins form circle with a square in the centre reminiscent of the first currency of the Chinese empire. These ‘ban liang’ coins were first cast during the Qin Dynasty around 200BCE. The four coins together portray a complete panorama of mice foraging among various fruits with select coloured elements.

Struck by The Perth Mint from 99.99% pure silver, each coin is issued as legal tender under the authority of the Government of Tuvalu.

The Perth Mint will release no more than 1,500 of the Year of the Mouse Quadrant 2020 1oz Silver Four-Coin Set.

DESIGN
The top coin’s reverse portrays a mouse climbing a branch with a plum tree bearing flowers in the background. Also included is a butterfly and falling petals.

The right-sided coin’s reverse depicts two mice at the foot of the branch among grass, pebbles and half a pomegranate. One mouse is in the midst of climbing the branch.

On the left-sided coin, the reverse design features a mouse in front of a vine which bears a hanging bunch of grapes. Pumpkin leaves and vines are also incorporated with half a pumpkin visible in the foreground.

The obverse of each coin bears the Ian Rank-Broadley effigy of Her Majesty Queen Elizabeth II, the 2020 year-date, the weight and purity, and the monetary denomination.

PRESENTATION
The coin is housed in a classic display case with a clear lid decorated with a silver geometric design. The case is packaged in a beautifully illustrated shipper and is accompanied by a numbered Certificate of Authenticity.