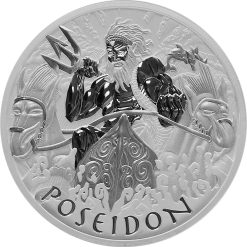 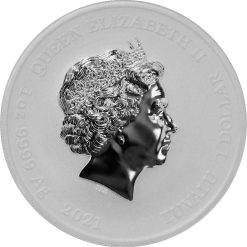 In 2014, The Perth Mint released its first ever antiqued coins in the Gods of Olympus series. The coins were incredibly popular and immediate sell-outs. To pay homage to a product that popularised the antiqued finish, the iconic Gods of Olympus returned in 2020 in an all-new bullion series. In 2021, the legacy continues with the second release of the series featuring Poseidon.

The 2021 Gods of Olympus – Poseidon 1oz Silver Bullion Coin has a maximum mintage of 13,500 worldwide.

In ancient Greek mythology, Poseidon was worshipped as the God of the Sea.

Historically, Poseidon was always portrayed as a mature man with a fully-grown beard, and equipped with his best known weapon, the trident, which he used to shake the earth, shatter rocks and create storms, causing devastating earthquakes and tsunamis. His other symbols include a bull, dolphins, horse and fish.

Poseidon was one of six children and the second of three brothers, Zeus, Poseidon and Hades, born to Rhea and Cronus, the ruler of the Titans. Having overthrown their father, the three brothers divided the universe between them. Zeus took control of the heavens, Poseidon the sea, and Hades the underworld.

The reverse of the coin depicts a bearded Poseidon riding the waves on his chariot pulled by two hippocampi, clutching his trident, with dolphins porpoising in the background. The design includes the inscription POSEIDON and The Perth Mint’s ‘P’ mintmark.