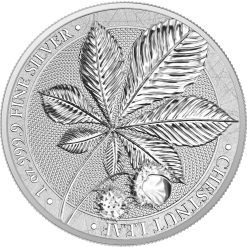 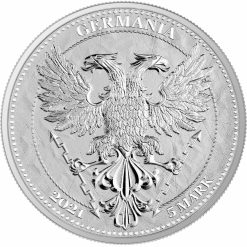 People have been fascinated by trees since… ever. Trees provide us with many benefits necessary for survival, including clean air, filtered water, shade, and food. They also give us hope and courage to persevere – even in the harshest conditions. Roots buried deep in the earth, trunk above the ground, branches stretching toward the sky, are symbolic, living links between our world and the world of supernatural beings. Strong connections between people and trees can be found in almost every religion, mythology, legends and traditions. Their physical nature and composition is often a base for stories full of magic and supernatural abilities. In many myths, a tree is a vital part of the structure of the universe. Gods and their messengers travel from world to world by climbing up or down a tree. The trees have been on earth long before people and possibly will be present long after we go… As a tribute to the power and mysticism of trees, Germania Mint is launching a series of 4 dedicated coins. Oak, Chestnut, Beech and Linden leaves will be the theme of these series.

The chestnut is a very popular tree that was planted in Europe by Roman armies. Mythology and the history of magic is abound of miraculous recipes and advice on how to use almost every part of it. Its fruit symbolizes chastity and it’s believed that chestnuts increase fertility and desire, which is why it is carried by women who want to conceive. Chestnut wood is known for properties that bring success and love. Druids used it to create talismans because the physical connection allowed the user to derive longevity and invigoration from the wood. Chestnut is a beautiful and powerful tree. Its power can be easily seen by sitting on the ground next to it and allowing its energy to clear the mind.

DESIGN
Germania Mint has placed the design of chestnut leaf and its fruits on the obverse of the coin, to help bring good luck and happiness to its owners. The inscriptions “CHESTNUT LEAF” and “1oz 999.9 FINE SILVER” are situated around the edge of the coin.

The two-headed eagle is the symbol appearing in Roman mythology associated with Janus – the god of all origins, guardian of doors, gates, passages and bridges, the patron of allied agreements and arrangements. The head turned in opposite directions symbolizes the past and the future. The lightning held in the claws of the eagle are a divine attribute, symbolizing strength and the power of creation and destruction. The inscription “GERMANIA”, the 2021 year-date and denomination are also featured on the reverse of the coin.

PRESENTATION
Each 2021 Chestnut Leaf 1oz silver bullion coin is presented in a protective capsule.and is accompanied by a certificate of authenticity.