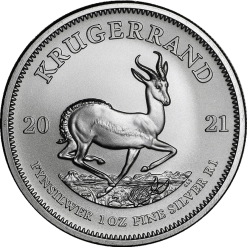 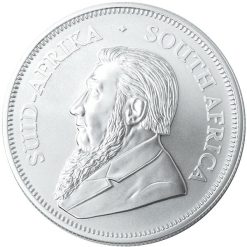 In celebration of the 50th anniversary of the gold Krugerrand in 2017, the South African Mint produced the first-ever silver coin in the series. 2021 marks the fourth year that the renowned South African Mint has offered this industry legend in a silver variant.

The reverse bears the classic image of South Africa’s national animal, the Springbok Antelope, traversing the ‘veld’ of its homeland. Set within a light, decorative frame, you’ll also find the ‘Krugerrand’ title and the year of issue, along with details of content (shown in Afrikaans and English), weight and denominational value.

The obverse bears the likeness of the final president of the former South African Republic (which later became known as Transvaal), Paul Kruger, who lived from 1825 to 1904. Also on the obverse, within a decorative frame, the South African legend in both Afrikaans and English.

Individual coins are presented in a Swan Bullion stylised plastic flip. Multiples of 25 are packaged into Krugerrand tubes with 20 tubes to a monster box (500oz to a monster box).

ABOUT THE SOUTH AFRICAN MINT