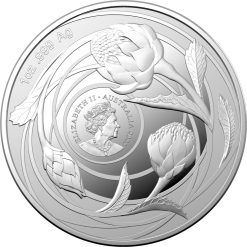 Swan Bullion is proud to present the Royal Australian Mint’s latest investment series – Wildflowers of Australia. Like the three preceding investment series, Wildflowers of Australia includes two exquisitely designed coins – one gold and one silver. Featuring the quintessentially Australian Waratah, these coins shine a light on one of the nation’s most recognisable and breath taking flowers.

The first release in the Wildflowers of Australia series showcases the Waratah – native to southeastern Australia including New South Wales, Victoria and Tasmania.

There are five species of Waratah, however the most recognisable is the Telopea speciosissima, which is the floral emblem of New South Wales. It features attractive, bright red flowers tightly packed to form a large head. The Waratah is highly symbolic in New South Wales with the states rugby team also sharing the same name.

The Indigenous Tharawal people who hail from Cronulla and its surrounds in Sydney use the Waratah in bush medicine by soaking its flowers in water and drinking the resulting blend.

Struck by Royal Australian Mint from 1oz of 99.9% pure silver, the coin is issued as legal tender under the Australian Currency Act 1965 and has a mintage of 50,000.

The reverse features the most recognisable Waratah species – the Telopea speciosissima. There are three fully bloomed flowers as well as the monetary denomination and reverse designers initials “AS”.

The obverse features the Jody Clark effigy of Her Majesty Queen Elizabeth II, the 2022 year-date, the weight and fineness. The obverse also depicts the three different blooming phases of the Telopea speciosissima in a circular display.