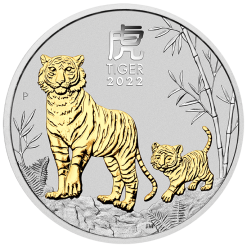 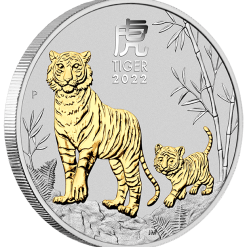 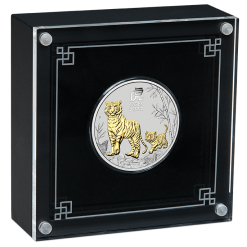 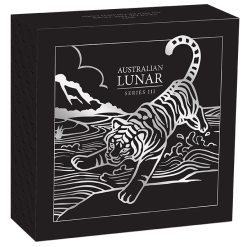 The stunning 2022 Year of the Tiger 1oz Silver Gilded Coin is the perfect gift or collectable for those born under the lunar tiger.

Released as Australian legal tender, each coin is meticulously struck by The Perth Mint from 1oz of 99.99% pure silver.

The Perth Mint will release no more than 23,500 of the Australian Lunar Series III 2022 Year of the Tiger 1oz Silver Gilded Coin individually out of a maximum mintage of 25,000

The coin’s reverse portrays a representation of a tiger cub following its proud and protective parent across a rocky terrain featuring ferns and bamboo. The tigers are gilded in 24-carat gold. Included in the design is the Chinese character for ‘tiger’, the inscription ‘TIGER 2022’ and The Perth Mint’s ‘P’ mintmark.

The coin is housed in a classic display case with a clear lid decorated with a silver geometric design. The case is packaged in a beautifully illustrated shipper portraying the story of how the tiger became the third animal of the Chinese lunar calendar and is accompanied by a numbered Certificate of Authenticity.

The shippers of the coins in the Australian Lunar Series III will, when arrayed together, form a diorama depicting the ancient myth of The Great Race.