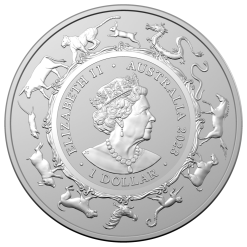 Swan Bullion is proud to present the Royal Australian Mint’s fourth release in its Lunar Investment Series – gold and silver investment coins celebrating the Lunar Year of the Rabbit. Honouring the Chinese zodiac, the series has proved popular at home and abroad.

Celebrating the Year of the Rabbit, the Royal Australian Mint has released this 2023 $1 Silver Bullion Investment Coin. Lunar New Year is celebrated throughout the world, and coins are considered to be a traditional gift. Featuring the lovely and gentle Rabbit and the Lunar calendar wheel, this coin is an auspicious gift or collectible.

The Rabbit is the fourth of the twelve signs in the Chinese Zodiac. According to legend, the moon goddess Chang’e has a rabbit as her pet, with the belief that it is the only creature amiable enough to match the goddess’ noble beauty. It is also believed that the Rabbit is the incarnation of the moon goddess herself and is always a symbol of pureness and auspiciousness.

The Chinese zodiac is based on the lunar calendar and features 12 animals that represent each year in a 12-year cycle. A popular system across south-east Asia, each animal of the Chinese zodiac and its characteristics are said to influence people born in the corresponding year. The Royal Australian Mint created a new investment series based on the Chinese zodiac with the inaugural release – the Lunar Year of the Rat – selling quickly when it hit the market in 2020.

Struck by the Royal Australian Mint from 1oz of 99.9% pure silver, each coin is issued as legal tender under the Australian Currency Act 1965 and has a maximum mintage of 50,000.

The reverse depicts the elegant and lovely rabbit, surrounded by plantain lilies which represent innocence, happiness and harmony. Also includes the inscriptions “YEAR OF THE RABBIT” and the Chinese character for rabbit, as well as the coins weight and fineness.

The obverse of each coin bears the Lunar calendar wheel, rotated so that the rabbit is shown at the top. It also features the effigy of Her Majesty Queen Elizabeth II designed by Jody Clark as well as the monetary denomination and 2023 year-date.

Each bullion coin is presented in a protective capsule.