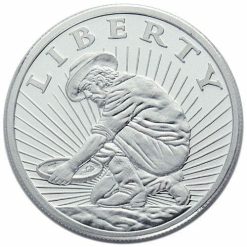 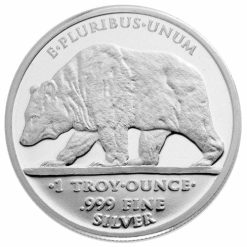 Featured on the original California Diamond Jubilee Half Dollar is an illustration of a prospector. The prospector stands a symbol of the 1849 gold rush, which was ultimately responsible for California achieving its statehood. As with the original design, the prospector is depicted kneeling over the rocky terrain as he checks his mining pan for any signs of gold. Emanating behind him are beams of sunlight. The word “Liberty” appears in an arched formation directly above him. Omitted from the original design is the phrase “California’s Diamond Jubilee” along with the mintage year of “1925.”

Gracing the reverse side of the round is California’s official state mascot, the grizzly bear. From its thick coat of fur to its significant girth, artists have taken great care to capture every detail of this ferocious predator. Hovering over the fierce grizzly are the words, “E Pluribus Unum.” At the bottom of the round, the nation’s name and coin’s denomination have been replaced by the weight and purity of the round.