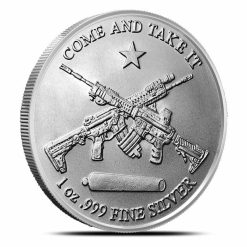 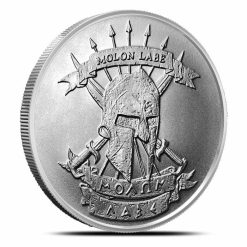 COME AND TAKE IT is inscribed on the reverse of each Molon Labe round, along with 1 OZ .999 FINE SILVER. Between the inscriptions are two overlapping guns, one star and a cannon. The phrase — along with the cannon and star — also appeared on the Gonzalez flag, which was flown by Texans during the Battle of Gonzales which initiated the Texas Revolution.

The phrase “molon labe” has been repeated by countless leaders and generals over the centuries. Meant to inspire, the expression is relevant to this day, as gun control takes the nation by storm, and Americans’ right to bear arms is threatened.