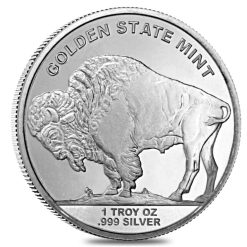 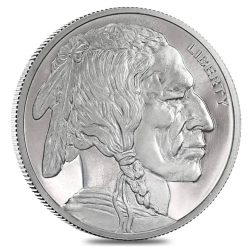 The reverse of the rounds depicts a standing American bison (buffalo) atop a mound of dirt. Supposedly, the bison was modelled after “Black Diamond” in the New York Central Park Zoo. The rounds are hallmark stamped with their weight, purity and Golden State Mint and have a reeded edge.

The obverse of the round depicts a Native American and with the motto ”LIBERTY” on top right.

Individual GSM Buffalo Rounds are presented in a Swan Bullion plastic flip. Multiples of 20 are provided in a tube.