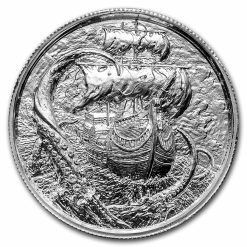 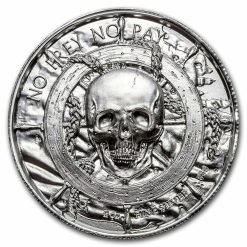 In this 4th release in the Privateer Series, one of the most fearsome monsters of the seven seas is featured in the design. The Kraken, rumored to plague oceans the world over from the tales of Odysseus in Homers ILLIAD to the tales of Caribbean pirates in the 17th and 18th centuries, is believed to lurk the depths of the ocean waiting to strike any sailors that wander across its path.

On the obverse of the 2oz Elemetal Privateer The Kraken ultra high relief silver round you’ll find the image of the kraken’s massive tentacles emerging from the water to ensnare a passing galleon. There are no engravings on this face other than the frightening image of death that comes from the kraken.

The reverse features the common design theme of all Privateer Series rounds. In this design you’ll notice a human skull set against a backdrop of a ships wheel. The pirate motto ‘No Prey, No Pay’ is found above the design, with the rounds weight, metal content, and purity struck below.