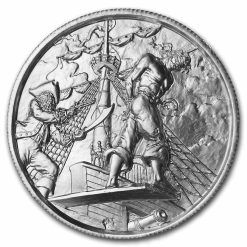 When a ship captain discovered that one of his underlings was derelict in his duties or interested in a mutiny, the common sentence was to send that individual down the plank. With their hands bound behind their back, that individual stood little chance of surviving once tossed overboard into Davy Jones’ locker.

The reverse side of the 2oz Elemetal The Plank ultra high relief silver round, you’ll find the image of the pirate ships wheel, featuring a rope wrapped around the wheel and a human skeleton set in the very centre. The pirate motto ‘No Prey, No Pay’ is featured on this side along with the weight, purity, and metal content of the round.

On the obverse of each Elemetal The Plank ultra high relief is the image of a poor soul who’s been sentenced to death by walking the plank. As the pirate captain stands behind him with a gun and sword out to push him along, the mutineer approaches the edge of the plank with his eyes covered and hands bound behind his back.