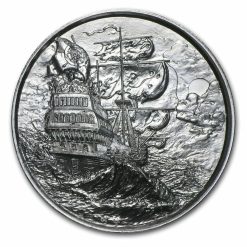 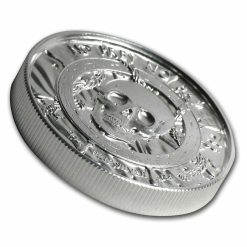 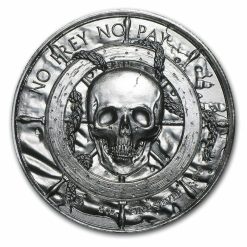 Minor toning on the rim of the coin.

Privateers occupied a grey area that is confusing to many in the modern world. While pirates raided ships on the high seas for personal wealth, committing criminal acts of robbery and violence, privateers were commissioned by governments to raid foreign vessels during wartime.

On the reverse side of the 2oz Privateer ultra high relief silver round is the stunning image of a privateers vessel navigating choppy seas. The ship is featured with fluttering sails, and the moon is trying to break through cloudy skies.

The obverse side of the round features a complex imagery reminiscent of pirates. In the centre is a skull, encircled by a ships helm wheel with a rope wrapped around it. Along the top is the engraving ‘NO PREY NO PAY’, while the rounds purity, metal content, and weight are engraved below the image.