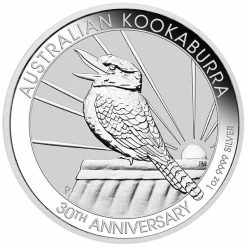 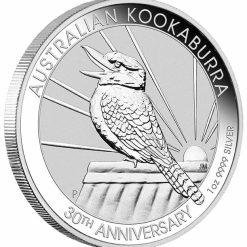 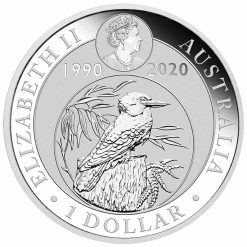 A landmark achievement, the Australian Kookaburra Bullion Coin celebrates its 30th year in 2020 with a special anniversary coin design.

A laughing kookaburra, the largest member of the kingfisher species, is synonymous with the Australian outback. The Perth Mint is pleased to present three bullion coins featuring the kookaburra, meticulously struck from 99.99% pure silver in 1 kilo, 10oz and 1oz sizes.

Only 500,000 1oz coins will be released. No mintage limit applies to the 1 kilo and 10oz coins, however production will close at the end of 2020 and The Perth Mint will declare each coin’s official mintage.

Each coin in this program is issued as legal tender under the Australian Currency Act 1965.

DESIGN
The reverse of each coin depicts a kookaburra perched on a roof at dawn with stylised rays of light in the background. Also included in the design is the inscription ‘AUSTRALIAN KOOKABURRA 30TH ANNIVERSARY’, The Perth Mint’s ‘P’ mintmark, and the weight and purity.

The obverse of each coin bears a representation of Stuart Devlin’s depiction of a kookaburra on a tree stump surrounded by native foliage, as it appeared on The Perth Mint’s 1990 Australian Kookaburra Silver Bullion Coin. Also included is the Jody Clark effigy of Her Majesty Queen Elizabeth II, the inscription ‘1990 2020’, and the monetary denomination.

AUTHENTICATION FEATURE
Each coin’s reverse includes a security feature in the form of a micro-laser engraved letter within the coin’s AUSTRALIAN KOOKABURRA heading. It is only detectable under a magnifying glass.