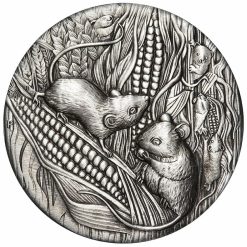 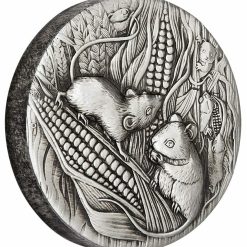 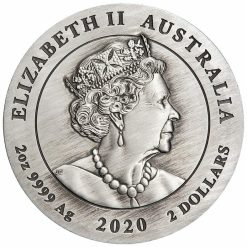 The first coin in our Australian Lunar Series to feature an ‘antiqued’ finish, this 2oz silver release portrays our 2020 Year of the Mouse design in exceptional detail.

The Australian Lunar Series III 2020 Year of the Mouse 2oz Silver Antiqued Coin is struck by The Perth Mint from 99.99% pure silver and issued as legal tender under the Australian Currency Act 1965. No more than 1,888 of these coins will be released worldwide.

DESIGN
The coin’s reverse portrays two mice foraging on husks of corn in the foreground and mice among stalks of corn and wheat in the background. Also included in the design is The Perth Mint’s ‘P’ mintmark.

The obverse of the coin depicts the Jody Clark effigy of Her Majesty Queen Elizabeth II, the weight and fineness, the 2020 year-date and the monetary denomination.

TECHNICAL NOTE
The coin has been individually ‘antiqued’ to give it a unique finish conveying the surface abrasions of an ancient artefact. As a result of this treatment the appearance of each coin will vary from one another.