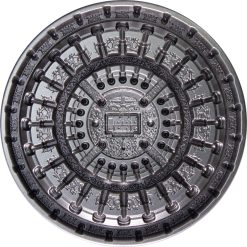 Influenced by the designs of old, this Vault 2oz silver stackable takes direct inspiration from the inner vault doors designed by Herring-Hall-Marvin Safe Co., formerly Hall’s Safe & Lock Co – as can be seen in the People’s Bank out of Pennsylvania.

Incorporated by Joseph L. Hall in 1867, the Hall’s Safe & Lock Co. of Cincinnati, Ohio quickly grew to become the largest safe and vault manufacturer in the world. By 1892 it was responsible for “one-half the entire output of fire proof and burglar proof safes and vaults in the United States” and had offices throughout the United States and much of the rest of the world.

The obverse features an accurate depiction of the inside of a Herring-Hall-Marvin Safe Co. vault door, including the lock bars. The inscriptions “THE VAULT” as well as “2oz” and “FINE SILVER” are present in the middle of the stackable. Various parts of the obverse have high reliefing.

The reverse features an inverse of the obverse, allowing the individual pieces to stack together.

Has an antiqued finish.

Each Vault 2oz silver bullion stackable is presented inside of a specially designed protective capsule.