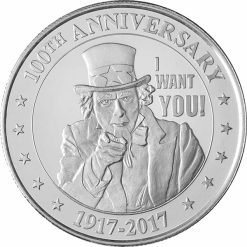 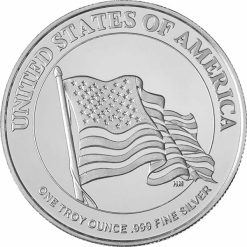 Highland Mint brings yet another example of fine, highly recognized Americana with this beautiful round celebrating the 100th anniversary of the original “I Want You!” poster used by the U.S. Army.

Obverse
The obverse features Uncle Sam, along with inscriptions of “I WANT YOU!,” “100TH ANNIVERSARY,” and “1917 – 2017.” The original artwork was first seen in July 1916 on the cover of Leslie’s Weekly with the headline “What are You Doing for Preparedness?” The poster went on to become one of the most recognizable posters in the world. Between 1917 and 1918, over four million copies were printed as the US needed to rally military enlisting to support World War I. The popular image was adapted for use in World War II as well.

Reverse
An American flag waves across the reverse. Inscriptions around the rim include “UNITED STATES OF AMERICA” and “ONE TROY OUNCE .999 FINE SILVER.”