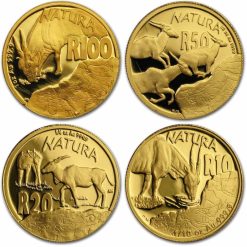 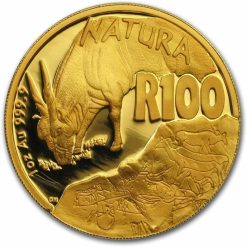 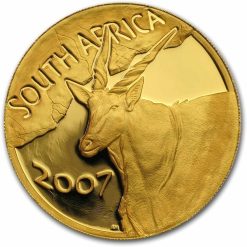 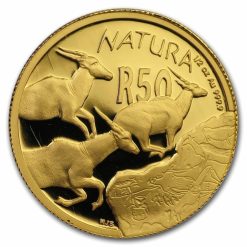 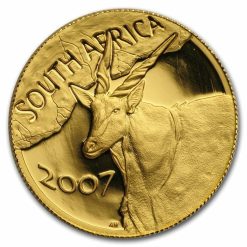 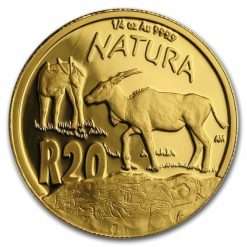 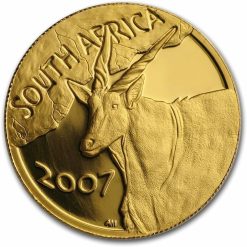 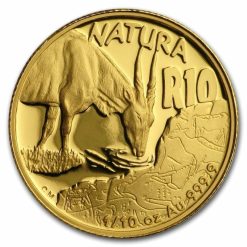 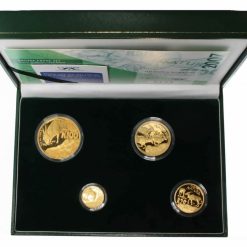 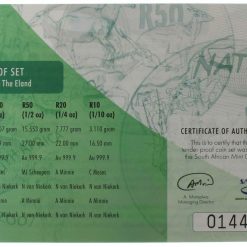 In 2005 the Natura 24 ct gold coins featured the first theme in the “Giants of Africa” series, the Hippopotamus. The Hippopotamus was followed by the Giraffe in 2006. In 2007, the Eland (Taurotragus oryx), will be depicted as the largest antelope in South Africa.

An Eland bull can weigh up to 900kg and can grow to a shoulder height of 1.7 metres. In spite of its heavy physique, Eland are remarkably agile and large bulls can easily jump over regular fences. They have a slight hump at the shoulders and a prominent dewlap. The heavy horns of both sexes slant backwards and can grow to a length of 1 metre. Females weigh only about 450 kilograms. As they grow older their colour changes from a tawny colour to grey. The male has a tuft of hair on the forehead. With age this tuft changes colour from dark brown to black. They also have a distinctive faint vertical white stripes on their flanks.

The Eland is a browser, utilising a wide diversity of plant species. It can exist for long periods without open water, but is then reliant on fruits like the tsamma melon and the Gemsbok cucumber to meet its water requirements. They will also eat young grass especially after it has been burnt and new green shoots appear.

The Eland are gregarious and occur in herds of up to 200 during mating season. Normally they run in herds of about 60 – 70 animals. Old bulls split from the herd and remain solitary. Although the Eland does not have a specific breeding season, in South Africa it has been noted that there are peak months when significantly more calves are born than in other months. A single calf is born after a gestation period of approximately nine months. Calves can run with the herd a few hours after birth.

Depictions of Eland are common in Bushman rock paintings through South Africa. Ancient rock art sheds light on the trance experiences of Bushman shamans (medicine men). When shamans painted an Eland, they did not just pay homage to a sacred animal; their rock paintings showed how hunters gained power from the animals that they killed. To the Bushmen the Eland was not just an important source of nourishment, they believed it had supernatural potency.

This 4 gold proof coin set is accompanied by a green box and certificate of authenticity numbered a 0144 issued by the South African Mint.