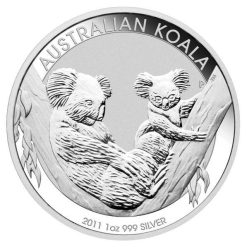 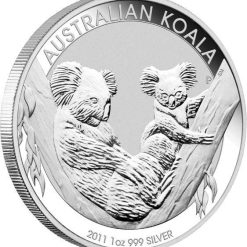 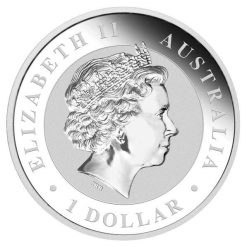 Although often referred to as koala bears, the koala is actually a marsupial native to the continent of Australia. The koala is a nocturnal creature known to sleep for as many as 20 hours in a day, and although they have a cuddly reputation, the animals can actually pose quite a danger to humans when threatened.

On the reverse side of the 2011 1 oz Australian Silver Koala coin is the unique design feature used only in 2011. It features an adult koala and a young koala resting in the crook of a tree. The words “Australian Koala” are engraved above the image, while the coin’s year of minting, weight, purity, and metal content are featured below.

The obverse side bears the right-profile portrait of Queen Elizabeth II commonly found on Perth Mint products. Her Majesty’s effigy is accompanied by engravings of “Elizabeth II,” “Australia,” and the face value of the coin.