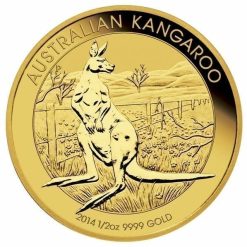 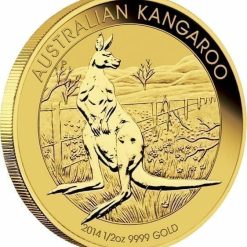 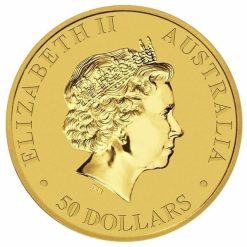 DESIGN
The 2014 1/2 oz Gold Kangaroo features a kangaroo in a classic pose set against a field of wildflowers. The “P” mint mark, appears on the reverse of each coin, along with the inscription “Australian Kangaroo,” the date, the size of the coin and the purity of “9999 Gold.”

The obverse of each coin shows the Ian Rank-Broadley likeness of Queen Elizabeth II, as well as the coin’s monetary denomination, $50 AUD.

PRESENTATION
Each bullion coin is presented in protective acrylic capsules.

About The Perth Mint
The Perth Mint is Australia’s official bullion mint and wholly owned by the Government of Western Australia. Established on 20 June 1899, two years before Australia’s Federation in 1901, the Perth Mint was the last of three Australian colonial branches of the United Kingdom’s Royal Mint (after the now-defunct Sydney Mint and Melbourne Mint) intended to refine gold from the gold rushes and to mint gold sovereigns and half-sovereigns for the British Empire. Along with the Royal Australian Mint, which produces coins of the Australian dollar for circulation, the Perth Mint is the older of the two mints issuing coins that are legal tender in Australia.

Images are for illustration purposes only.
Bullion coins supplied may vary in finish, including colour tone, tarnishing, scratches and copper spotting. Image quality may also vary when viewed on different desktop and mobile devices.