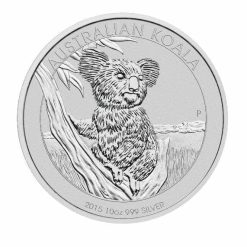 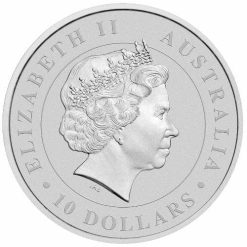 You must register to use the waitlist feature. Please login or create an account
Categories: 10 OZ Silver Coins, Silver, Silver Coins, Silver Live Brand: The Perth Mint
Live Spot Prices
Latest
The 2015 10 oz Australian Silver Koala features a single, koala perched in a tree. The vast expanse of the outback is noticeable in the background, with a sweeping prairie grassland giving way to a mountainous landscape in the distance. The koala has been intricately designed with long hair and clearly defined claws on its fingers and toes as it sits in the treetop. The opposite side of the coin will feature the same stamps that were used on the 2014 silver coin series produced at the Perth Mint
On the obverse side of the coin, the aforementioned koala image is featured in stunning detail. Above the koalas head along the rim of the coin is the phrase Australian Koala, while the minting year, weight, and purity of the coin are stamped below the image. On the reverse side, a profile bust image of Queen Elizabeth is featured in the center. Above her majestys head, the words Elizabeth II, Australia will be featured.
Coin details:
Contains 10 oz of .999 pure silver.
Minted by the Perth Mint in Australia.
Features a koala design to honor the native animal.
Comes on capsule