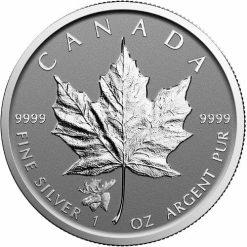 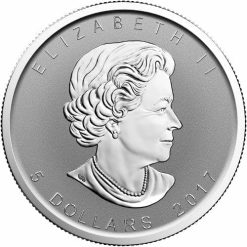 The obverse of all Wild Canada Canadian Silver Maple Leaf reverse proof coins features the right-profile portrait of Queen Elizabeth II. Captured by Susanna Blunt, Her Majestys profile appears along with engravings of the Queens name, the year of issue, and the face value of the coin.

On the reverse of each 2017 Moose Privy Canadian Silver Maple Leaf bears the traditional sugar maple leaf design for the bullion series, complete with a moose privy mark in the lower-left area of the design field. These coins include all of the safety and security features of the Canadian Maple Leaf bullion collection, such as the radial lines that help deter counterfeiting.

All Canadian Silver Maple Leaf coins with privy mark in the Wild Canada Series are reverse proof specimens. Coins with a reverse proof striking have clear, mirrored finishes on the design set and a beautiful, frosted finish for the background fields.