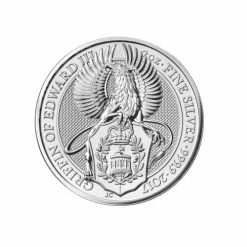 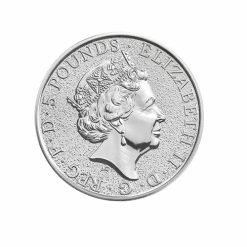 This is the second two ounce silver coin in the Queen’s Beasts series issued by Britain’s Royal Mint. The coin features a griffin, which Edward III had engraved on his private seal.

Queen Elizabeth II’s coronation in 1953 was watched over by 10 heraldic beasts, created to represent the various branches of royal genealogy over the centuries. The griffin is thought to be a symbol of strength, guardianship and vigilance, and is holding the shield of Edward III. The shield displays the Round Tower of Windsor Castle, where Edward was born. The shield is surrounded by oak branches with the royal crown above.

The coin is exceptionally thick, as the diameter is the same as a one ounce coin. Unusually, both sides were executed by Jody Clark, an engraver at the Royal Mint. His effigy of the Queen is the only fifth to have graced British coins since 1953.

Comes in a cracked capsule, some light scratches to the Queen’s head on the reverse side.