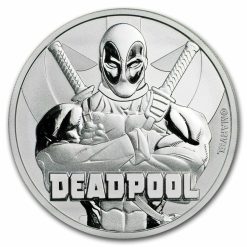 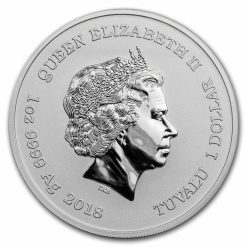 No character from the Marvel Comic Universe has a more intriguing background than Deadpool, a figure only recently released compared to many of the staples from the comic universe. Deadpool first appeared in THE NEW MUTANTS in February 1991 and was originally created as a supervillain. Over the course of time, his figure would evolve into an anti-hero with a background as a mercenary and assassin.

On the reverse of 2018 1 oz Tuvalu Deadpool Silver coins is the image of the anti-hero. Deadpool has been portrayed in two feature films to date by actor Ryan Reynolds. Fitting for Reynolds, the character has a tendency to constantly joke and is known to break the fourth wall by talking to the audience throughout films. Deadpools depiction on the coin includes his figure standing imposingly with his arms crossed and his swords visible over his shoulders.

The obverse side of 2018 Tuvalu Deadpool Silver Coins includes the effigy of Queen Elizabeth II. This is the fourth-generation design of Queen Elizabeth created in 1998 by Ian Rank-Broadley for the Royal Mint. The design has been in use throughout the Commonwealth since 1998 and depicts the Queen in right-profile relief.