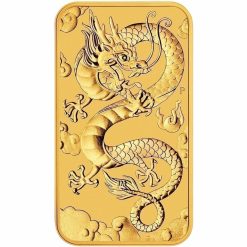 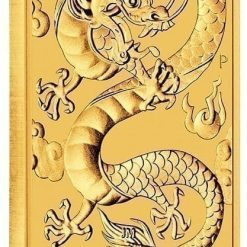 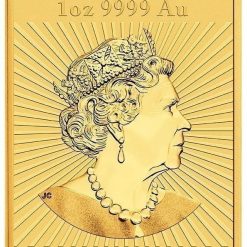 DIVINE NEW RECTANGLE RELEASE
Following on from a popular first release in 2018, The Perth Mint’s second rectangular Dragon bullion coin has been launched with a fresh design celebrating oriental themes.

Struck in the shape of our minted bars, the 99.99% gold coin is issued as legal tender under the Australian Currency Act 1965. The obverse depicts the Jody Clark effigy of His Majesty Queen Elizabeth II, 2019 year-date, weight and fineness, and the monetary denomination.

The coin’s reverse depicts the highly revered Chinese dragon chasing a flaming pearl, a symbol of wisdom and enlightenment, among clouds.

The rectangular Dragon 2019 1oz Gold Bullion Coin is subject to a strict annual mintage with no more than 20,000 being released.

AUTHENTICATION FEATURE
This coin includes an authentication feature on the reverse in the form of a micro-laser engraved letter. Contained within one of the dragon’s claws, this letter is only detectable under a magnifying glass. This feature is designed to make it significantly more difficult for the coin to be counterfeited.