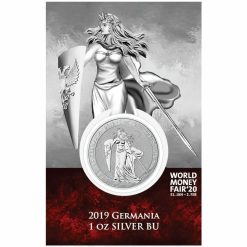 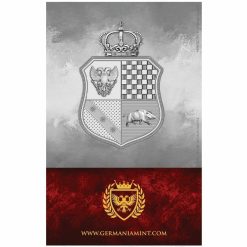 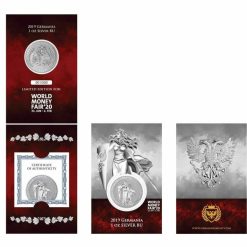 “Germania” is the Latin term for Germany, from which the name “Germany” is used in English language today. Due to the connection with patriotic feelings, this word was present mainly in German literature and poetry. In ancient times the area inhabited by Germans east of the Rhine and north of the Danube rivers was called Germania. At that time its first personifications on coins and reliefs appeared, depicting a brave woman – the guardian of the nation.

Obverse
Germania as a personification presents a beautiful woman with long, flowing hair, dressed in a wind-blown dress, with a victory symbolizing laurel wreath on her head. The Amazon wields an imperial sword (Reichsschwert) and a medieval shield with the image of a two-headed eagle, which is also the main motif of the coin’s reverse.

Reverse
The two-headed eagle is a symbol appearing in Roman mythology associated with Janus – the god of all origins, guardian of doors, gates, passages and bridges, the patron of allied agreements and arrangements. Heads facing the opposite symbolize the past and the future. The lightning bolts held in the claws of an eagle are a divine attribute, symbolizing strength and the power of creation and destruction.