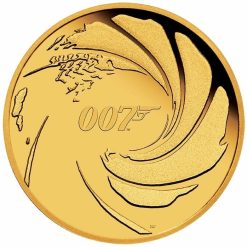 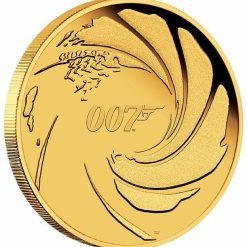 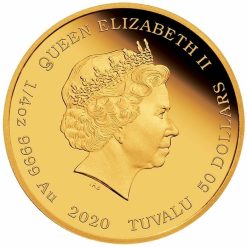 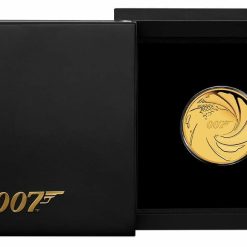 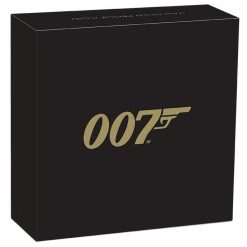 This coin celebrates the fictional British Secret Service agent James Bond, also known as 007. Created by author Ian Fleming in 1953, Producers Albert R. ‘Cubby’ Broccoli and Harry Saltzman brought Bond to cinema screens for the first time in 1962 with Dr. No. More than 50 years later James Bond continues to entertain and excite audiences around the world in one of the longest running and successful film franchises.

James Bond is one of a handful of elite agents with a ‘licence to kill’, denoted by a code name beginning with ‘00’.

The 007 gun logo was designed by Joseph Caroff under Creative Director David Chasman of United Artists. Together with the franchise’s signature opening sequence, which portrays Bond at the centre of a stylised gun barrel at the beginning of every film, the 007 gun logo has become synonymous with the character.

Struck by The Perth Mint from 1/4oz of 99.99% pure gold, the coin is issued as legal tender under the authority of the Government of Tuvalu.

DESIGN
The coin’s reverse portrays the iconic Bond 007 gun logo at the centre of a gun barrel.

The obverse of the coin bears the Ian-Rank Broadley effigy of Her Majesty Queen Elizabeth II, the 2020-year date, weight and purity, and monetary denomination.

PRESENTATION
Each coin is presented in a 007 branded case within a themed shipper and accompanied by a numbered Certificate of Authenticity.