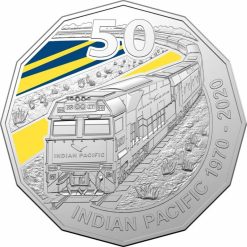 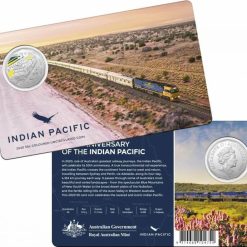 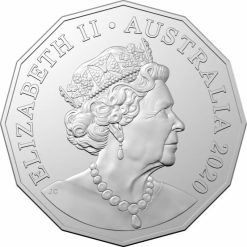 Following on from the popular 2018 3801 – A Legend of Steam and the 2019 90th Anniversary of The Ghan releases, the Royal Australian Mint presents this 2020 uncirculated 50 cent coin celebrating the 50th anniversary of the iconic Indian Pacific transcontinental rail journey. Rail enthusiasts, coin collectors and travellers will enjoy this coin honouring one of Australia’s great railway adventures.

On 23 February 1970, the first Indian Pacific service left Sydney, becoming the first direct train to cross the Australian continent. This service was made possible when the east-west standard gauge project was completed several months earlier, allowing a single journey from east to west of Australia and return.

The Indian Pacific is considered one of the great railway journeys in the world. The wedge-tailed eagle logo of the Indian Pacific reflects the unique and ancient landscapes that are enjoyed by passengers.